Marriage Counseling And Lesson For Every Christian Woman Part 4 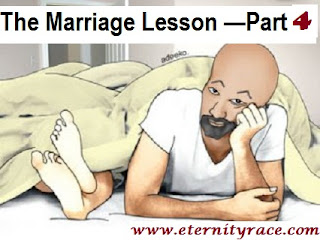 This is the concluding part of the marriage counseling story recommended for every Christian woman who desires to build a happy marital life. I pray that the Lord Jesus Christ will strengthen and empower you with the divine wisdom and understanding never to makes terrible mistakes as infer in this story and you might also read the first impact lesson and the second in our previous updates. and also the 3rd part for more understanding.

(Continuation) ..........after a whole month of daily calls to Kenny with no response, I finally gave up. I knew my marriage was over. I had gone through the full cycle from tears to pain in my heart to anger to being just blank. I have finally resigned myself to fate.

Even the strength to pray had left me. I have tried interpreting Kenny’s silence in different ways but my conclusion was that he just didn’t love me enough to fight for us. I sent him different text messages and not once did he humor me and respond.

I just could not understand why a man will be silent after hearing his wife was raped..As always my mum walked into my bedroom that Friday afternoon once again to ask what happened between my husband and I. She had soon figured out something was wrong but I always refused to tell her. ”Lola, you know what? Your father and I have tried. You have stayed in our house for over a month and we have been caring.

You can’t keep saying there is nothing wrong when I have been married for thirty five years and I know more than you” ”Mum, please I don’t have the strength to argue”. ”Okay then, your father and I have decided you can’t live here anymore. We will not harbor a married woman in our home. Since you and your husband don’t respect us enough to seek for advice. Please go back to him or wherever you want but you cannot stay under my roof”.

Still shocked at what she was saying, “Mum?” ”Daughter!!! Yes?” I finally relented. I didn’t even have a plan B.” Mum, Kenny and I have serious problems. Our marriage is not even up to a year and we don’t even know how to move forward”. ”Okay tell me everything”. So I sat for over an hour and told my mum every single detail from my wedding night to the day I left Kenny’s house. Surprisingly, my mum did not interrupt or blow up at me.

I expected her to start screaming but her calmness amazed me. ”Heeeeeeee Omolola, O ti ba ye je (you have spoilt the world)” She said in Yoruba language when I was finally done. ”Mummy haba, what did I do wrong?

How can Kenny just abandon me here? His love is fleeting mum, it can’t even stand the test of time”. I said with deep anger and disappointment. ”hmmmmm, first of all, you are changing your church. The kind of pastor’s wife that will give you such advise is not who you should be listening to. Why didn’t you call me? Why did you go to an outsider?” ”Mum, you are the one that said I should keep our matters private”.

”Not when it is crumbling my dear, we all need help once in a while”. ”Okay mum, what do we do now? Do you think there is any chance for Kenny and I”. ”Of course, your father and I have had greater battles that we have overcome. Marriage is filled with battles; we fight, win, conquer and fight another day.

READ ALSO: The Danger Of Marital Pressure In Life Of Spinsters.

We never give up. It only ends the day you stop fighting for it. Lola, you keep fighting till you conquer. There is no end. You made some terrible decisions and took some wrong steps”. ”Mum, what about Kenny? He took a lot of wrong steps too”. ”Yes, I will face Kenny but I need to talk to you first. I told you not to kill yourself over not having a child yet. It will come. You shouldn’t have fasted and deprived your husband without his full consent.

Moreover, you should have given him his marital right between 6pm when you break your fast and midnight when the next day starts. You shouldn’t have run from your home without his consent and come hide here.

To tell you the truth, it will take God for Kenny to be able to sleep with you again. Both of you, your actions have spoilt a lot of things. This matter should not have generated to this level. First thing tomorrow morning, I am going back to Abuja with you, we are going to see your husband”

True to her word, by 11 am on Saturday, which was the next day, we had arrived my house. As soon as I saw Kenny’s car parked in the compound, my heart started beating fast. I wished he was not home even though mum had called earlier and told him she was coming to see him.

He opened the door as soon as we were approaching and I assumed he had seen us through the window and prostrated, greeting my mum in Yoruba language. Kenny totally ignored me and my mum just smiled at us.

I left them in the sitting room and went into the room. Everything was just as I left it and my investigation as to whether somebody else had been living with him came up empty. I heard my mum call me from the living room and I quickly dropped my bag and went back to join them. ”Mummy, Lola does not want to be married.

In less than a year of marriage she has shown blatant disregard and disrespect both for me and this home and I am sick of it. Does she think if it was another man, he won’t have started womanizing by now? I stayed faithful even when she refused to be faithful to our marriage vows”. Kenny said with so much anger. ”Please don’t threaten us with tales of unfaithfulness. So you want an award because you didn’t cheat?

I said. ”Keep your mouth shut Lola, just shut up” my mum shouted while Kenny just shook his head. I instantly felt remorseful. I listened as my mum and Kenny started talking. I truly listened to his hurts and pains as he opened up to my mum and for the first time I understood the gravity of where we were.

By the time they started talking about the rape incident, Kenny shed tears. He just kept quiet while tears fell from his eyes and I was broken for both of us. ”Mummy, I warned Lola, I warned her not to go.

I haven’t been able to get that image out of my head ever since Daddy told me. Where do we start from? She refused to sleep with me all in the name of prayers and freely gave it to a thief?” ”Kenny, don’t say she freely gave it. We all still feel the pains of that night most especially your wife. The pain she is still in as a result of that incident is great. She needs a lot of time to heal”.

My mum said. ”I warned her, I warned her mummy” Kenny insisted. My mum began to talk to Kenny about us communicating better, about understanding each other and being quick to forgive. She spoke and fear gripped my heart as I looked at Kenny’s face.

After so much advice from mum, Kenny began to calm down. ”Both of you need to pray, be patient and communicate” mum said again. ”Mummy, truth be told, I am not sure if this marriage still exists. I don’t even know where to start with Lola” Kenny said. ”You both start with forgiving each other and then take it one step at a time. You start with conversations, heart to heart ones, share your pains and fears and with time the intimacy will come and with time you will heal”.

”Okay mummy, thank you ma.” Kenny said. About an hour later, mum left our home in a cab, headed to the airport for her flight back home. She refused to stay the night despite all our pleas. As soon as she left, I turned to Kenny to apologize. ”Baby, I am sorry”.

I said to Kenny as he went back to sit on the sofa and I sat beside him. He turned to me, ”Omololami, I am sorry too, I am sorry I wasn’t with you during this painful period. Truth is, I don’t even know if we can fix this”. ”We will babe”, I said with renewed confidence, ”we will, one day at a time”. (THE END)

Title : Marriage Counseling And Lesson For Every Christian Woman Part 4
Description : This is the concluding part of the marriage counseling story recommended for every Christian woman who desires to build a happy marita...
SALVATION MESSAGE