Home » Warning And Judgement » What Are The Consequences Of Sin?

What Are The Consequences Of Sin? 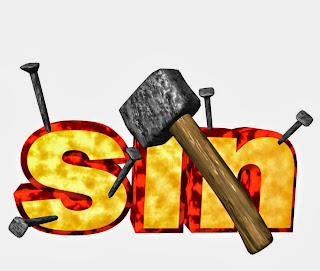 WHAT IS SIN?
1 John 5:17 " All Unrighteousness is a sin." Anything that is not Holy, not clean and Unacceptable before God. It might be acceptable by Men. But all Soul belong to God. He has the Final Say. Ezekiel 18:4, "The soul of the father and son and every living soul are mine said the Lord. But the soul that sin shall surely die. Deuteronomy 10:17. "For the Lord your God is God of gods, and Lord of lords, a great God, a mighty, and a terrible, which regardeth not persons, nor taketh reward". From the scriptures above, we can derived that God is not partial neither take authority or counsel from any spirit or dominion.

When ever he speak, he speak with Fire. When ever he got angry, he vomit fight. Its a fearful thing to fall into the hand of living God. When Satan, demons and witchcraft powers and destiny destroyer tends to afflicts you. Your faith lays in God, believing that he can saved and delivers. But, when you come short of his glory and sins against him, And he desired to consumed your soul in Hell, whom shall you run unto? Luke 12:5 ,"But I will forewarn you whom ye shall fear: Fear him, which after he hath killed hath power to cast into hell; yea, I say unto you, Fear him"

READ ALSO: The Backsliding State Of A Christian.

My dear brethren, The fear of God is a big treasure. Its a mandate that we should serve him, with fear and trembling. Please fear the Lord by abstaining from any forms of sins and impurities. The fear of God, is the evidence of Christ-like, is the origin of Christianity. Our Lord Jesus Christ, Started with obedience and fear of God and end-up his race and mission with Godly fear, How much you?

As a believer in Christ, the basic desire of God for your life, is to live a practical Holy ,Truth and Righteous life and make heaven at last. Its quit unfortunate, that many has followed multitude into atrocities, committing sin, immoralities, some into fashion showbiz, worldly dressing and abominations. The mercy of God, cannot hinder God, from destroying all sinful NATIONS and sending them down to the PIT of Hell.

1 Corinthians 6:9, "Know ye not that the unrighteous shall not inherit the kingdom of God? Be not deceived: neither fornicators, nor idolaters, nor adulterers, nor effeminate, nor abusers of themselves with mankind, Revelation 21:8, But the fearful, and unbelieving, and the abominable, and murderers, and whore-mongers, and sorcerers, and idolaters, and all liars, shall have their part in the lake which burneth with fire and brimstone: which is the second death. You can see the eternal Judgement which God had laid aside for sinners. Its might interest you to know that, most people dieing everyday are ending-up in Hell.

Only about 1 or 2 soul, are making it to Heaven in a YEAR, sometimes NON, while thousands are trouping to Hell everyday, and Millions every year. Hell has enlarge her mouth to swallow many souls. For those, whom had given themselves unto deception and been deceived, following friends and siblings to commit sin, especially women, into worldly dressing and makes-up.

They thought, that God will not destroyed all that tends to recreate his creation. Beautifying and re-decorating his anointed temple, an image of God. However, The Almighty God Shall Judge all ignorant and wicked mothers, and they shall suddenly end-up in the pit of Hell.

Because due to their wickedness and ignorant, they pierce the ears of their beautiful baby girls whom God had given unto them. Putting cursed idol rings in their ears. Therefore exposing such child to worldly attires. Exposing the baby to spiritual husband and demonic influence. Forgetting the prophesy of the psalmist in Psalm 139:14. "I will praise thee; for I am fearfully and wonderfully made: marvelous are thy works; and that my soul knoweth right well.."

Once again, God will definitely Judge you wicked mothers. Trust me, you shall never escape Hell. Except you called that daughter and show her the ways of righteousness. Revelation 21:27,
"And there shall in no wise enter into it any thing that defileth, neither whatsoever worketh abomination, or maketh a lie: but they which are written in the Lamb's book of life. The rate of Iniquities is getting higher and abound , While the standard will of God in making Heaven is getting tougher.

Once you are saved from sin and comes to the knowledge of the truth and later went into sins willfully. There is no more sacrifice left for you. Once you are save, you are finally saved. The Lord is not mocked. We can't sin willfully , after having the knowledge of the consequence of sin and expect the grace of God to abide. Many had deceived themselves, Believing that God will forgive and be merciful and gracious unto them, after they might had lured themselves willfully into Sin.

God is never deceived. Is not all the prayer's of forgiveness will he ever honor or answered. He will first foresaw the zeal and sorrowful of your heart and also your willfulness of repentance before he can ever forgives you; for God can't forgive an unrepentent, unconfessed and none restituted sins. Proverb 28:13 "He that covereth his sins shall not prosper: but whoso confesseth and forsaketh them shall have mercy"

READ ALSO: The Doctrine Of Restitution.

We can't abused the grace Of God and expect God to play along with us. The rate of iniquities is multiplying on daily bases while the standard and pedigree of making Heaven is getting much tough. Its now a survival of the fittest. Its a personal race which need our daily self-examination and screening.

Title : What Are The Consequences Of Sin?
Description : WHAT IS SIN? 1 John 5:17  " All Unrighteousness is a sin." Anything that is not Holy, not clean and Unacceptable before God....
SALVATION MESSAGE

0 Response to "What Are The Consequences Of Sin?"